It’s a common topic of conversation around my parent’s dinner table on Sunday nights:  If you were to be served your last meal, what would it be?  The answers vary, most members of my family will say pasta bolognese, or baked manicotti; our version of soul food.  While those sound delicious, and would definitely send me to my grave a happy gal, my absolute favorite dish is not necessarily heavy or comforting.  Instead it’s a light, bright summer dish,  but one that conjures up very happy memories, and an even happier belly.

Between my junior and senior year of college, I spent the summer living in Paris.  It was one of the most magical summers of my life, I turned 21 in front of the Eiffel Tower, had a jambon et fromage crêpe almost every day, and danced with a French boy every night.

I studied at the Paris American Academy, and just down the block from my school was a restaurant called “Académie de la bière” – or the Academy of Beer.  It was a dark bistro that served bowls of Mussels and fries as big as your head, and my favorite dish:  Tuna Niçoise.

This is a traditional french salad that often includes haricot vert (fancy word for green beans), tuna, olives, egg, and potatoes.  Nowadays you’ll see various other ingredients make their way onto the plate, including red peppers, onion, radishes…you name it.  It’s a light, but hearty salad, and one that I spent many-an evening devouring during that beautiful summer in Paris.

I have been craving it lately, so I decided to make it for dinner one night, but with a very colorful twist!  Here is my Ciao Vel-last Meal, Niçoise Salad:

Instead of Tuna I chose wild-caught salmon.  I initially wanted to make the dish with Arctic Char, one of my favorite fish, but I got to the specialty grocery store way too late and the fish monger (a.k.a bratty high school student) was throwing eye-daggers at me.  I said “just give me something wild-caught” – $35 later, I had some King Salmon in my hand.  Expensive? Yes. Delicious?  Absolutely. 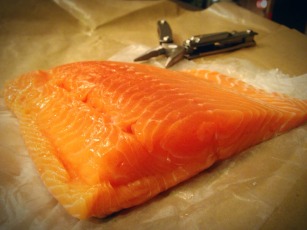 For my veggies I blanched green beans and carrots, roasted yellow squash and red bell peppers, and boiled purple potatoes.  Once all the veggies were properly cooked and cooled, I tossed them in a dijon vinaigrette.  You may remember I have about 30,000 jars of various kinds of mustard in my fridge, so I whipped up a quick dressing that added a nice depth of flavor to my vegetables.  I pan seared the salmon with lots of butter, skin side down, to get it nice and crispy.  Meanwhile I made a 6-minute egg (which will be featured next week!)

This meal tested my organization and time management skills, for sure.  It requires tons of prep, and timing to ensure that the veggies, the egg, and the fish don’t get overcooked.  As we know, not every meal I make is a total success, and this one was no exception:  the salmon was a little undercooked, the potatoes were a little overcooked, my egg, however, was absolutely perfect.  You win some, you lose some.

If you are looking for light, but filling mid week meal, give this one a whirl.  You’ll transport yourself to gay ole Paris and perhaps it’ll become your new last meal too!

My name is Tess Vella, I'm just a gal living it up in Dayton, Ohio. Some of my favorite things including champagne, coffee, red lipstick, and my bathrobe. Here on Ciao Vella you'll get a little insight into my simply fabulous life, my thoughts on food and drink, and watch me fumble through being a 30 something.